Cleaning out the old bookmarks:

To myself and all my sneaky visitors: notice some new links on the right. Now for some emptying of my Bookmark folder:

Concrete pumping and spraying: a practical guide by T.H. Cooke, a book on Google Books mentioning flexible formwork on page 99.

Some Flickr pictures of Erwin Hauer Studio dated May 2007.

Farhood Delijani’s thesis The Evaluation of Changes in Concrete Properties Due to Fabric Formwork.

Some Lamberton paper I don`t have yet.

Ryan Coover who worked a bit at CAST.

Kyle Sturgeon who worked on the FattyShell project.

A bio on Gustav Lilienthal.

Some history on flexible formworks. Concrete pumping and spraying: a practical guide By T. H. Cooke

Excerpt from the first draft of my paper to be published in Structural Concrete:

Up to this point in history, the use of fabrics in formworks was purely utilitarian, seen as a simple and cost-effective strategy in construction, although Lilienthal had commented on the resulting texture of the concrete. The first person to truly acknowledge the architectural and aesthetic possibilities of fabric formwork was Spanish architect Miguel Fisac (Fundación Miguel Fisac, 2010).

It may be no more than a matter of coincidence that Fisac graduated from the same Escuela Superior de Arquitectura seven years after Candela. After steadily growing into his own as an architect and expanding his architectural horizon with visits throughout Europe and later to Japan, Fisac would enter his most productive decade in the 50`s. His own ideas led him to new discoveries, first patenting a new type of lightweight brick and later his signature invention of distinctive looking, hollow post-stressed beams. These beams, reminiscent of bone structures, already led to a preoccupation with texture of concrete, as he “rebelled against the farce that was going on, and in which [he] had participated, of shuttering with boards and borrowing the wood grained quality of the surface to imprint it, inappropriately, onto the concrete. [He] decided to get rid of this incorrect texture.” In the wake of these inventions and numerous projects throughout Spain, he reflected on concrete and patented a new idea which he applied in 1969 in the Centro de Rehabilitación para la M.U.P.A.G. in Madrid. He used smooth and flexible polyethylene lamina hanging from a rigid structure as a formwork. “The result that the weight of this soft material gives to the concrete when poured is real and effective, the concrete takes on the texture of the material, in a tactile way. “ This allowed Fisac the freedom to create various types of facade panel giving each building he applied the method to a specific look and feel. This unconventional expression of concrete led to humorous misunderstandings, as investors of the Hotel Tres Islas complained that the plastic facade panelling would deteriorate too quickly, mistaking the fabric formed finish for plastic (Fernandez-Galiano, 2003). The preconceptions of what concrete is capable of are echoed in a recent observation that the term `fabric formwork` is an oxymoron, as the words `fabric` and `formwork` have conflicting connotations to many (Manelius, 2009). Fisac would use the method throughout the `70s to great effect, applying it for the last time in 2000 at the Teatro Municipal Miguel Fisac in Castilblanco de los Arroyos. 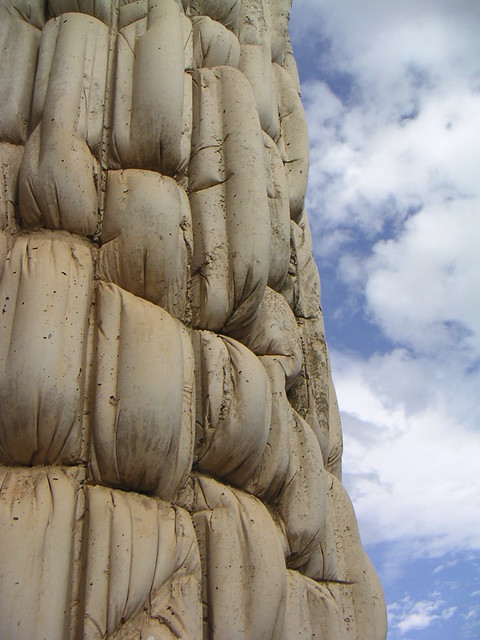 An interesting book is Obras de fábrica y metálicas by Paul Galabru published in 1964 which contains some notions similar to what Fisac developed and also uses the term “encofrado flexible”. Shoudl Fisac have owned this book, it would clearly have formed an inspiration. The timing is about right.

Hi, my name is Diederik Veenendaal and this is my website on fabric formwork, the topic of my doctoral research at the ETH Zürich. It`s not meant a blog yet, just a place to collect information and clean out my fabric formwork bookmarks. Fabric Formwork group on Facebook